We are so privileged to be able to dance together. Season after season, we gather, pray, move our bodies, listen to the quiet whispers of our souls, mobilize the creative life force, and grow ever more in right relationships within our global community. And for the most part, as we dance, we are safe to do so. We are free to listen to whatever music we choose, wear the clothes we want to wear, dance as close or far away from one another as we would like.

What are we doing with all of this privilege? Are we using all of this energy that we source in the dance to move into action in support of those who might not be able to dance with the same freedom we do? What are we choosing to do with our privilege?

In a recent paper I wrote for The Black Child Journal, I share a story about the power of choice. Here is an excerpt from that paper:

While recently working in East Africa, I had the privilege of spending time with a Rwandan gentleman, Jean-Charles, one of the unknown heroes and survivors of the 1994 genocide in his country. One of his parents was Hutu, the other Tutsi. Jean-Charles’ wife had parents who were both Tutsi. She survived too, although she lost all of her family. Understandably, she also lost her mind. Jean-Charles did not.

What made the difference?

Creative choice was one of the keys to why their experiences were so radically different. During the two months when they were separated and did not know if they would ever see one another alive again, Jean-Charles journeyed on a path unlike so many of his people’s. Amidst the horrors unfolding all around him, he was able to focus not only on his basic survival but also on creative leadership.

As a one-time employee of Hôtel Des Mille Collines, the famous place of refuge for over 1268 Tutsi and moderate Hutu Rwandan’s (Paul Rusesabagina. (n.d.). Retrieved January 10th, 2014 from http://en.wikipedia.org/wiki/Paul_Rusesabagina), Jean-Charles had access to another hotel, Hôtel des Diplomates. This hotel had been shut down early in the genocide. When journalists and certain diplomats were desperately seeking a roof over their heads, Jean-Charles had the keys to re-open this hotel. There was no water, no electricity, nor food. So with great innovation and courage, this man single-handedly found a way to create enough infrastructure in this building so that people could call it home. Candles were found. Small amounts of water were accessed. A community was born. Weeks later, he was approved by his superiors for making this brave call without formal permission or basic resources. (J. Charles, personal communication, December 27, 2013)

In our work with youth who have faced trauma, which is most of them, it is clear that those who are most resilient are those who have the opportunity to exercise creative choice on their path through life. Even when the trauma is chronic, due to ongoing poverty, violence, environmental toxins, or oppression from any number of sources, the creative process has the unwavering power to help individuals and communities tap the one resource that no one can take from them – the force of their souls. Whether these young people have been incarcerated or have gone to college, this applies.

Liberating the creative life force is, in fact, revolutionary. If a young person can dream something and know that they have the capacity to create something from nothing, they have both the awareness and internal muscle to do whatever their soul calls them to do. Obviously, they need enormous support to truly manifest a vision. But with the healthy will in tack, with the creative spirit awakened, dreams can be actualized.”  (Michaels, M. (2014). The rite of dance. Black child journal: Arts and the black child, Spring 2014 edition, 18-33.)

I am so honored to be a part of this revolution. For decades, I have been tending to hundreds of young love warriors waking up through the challenges of their lives to create initiatives rooted in truth and beauty, all serving their communities. In celebration of how these young leaders are coming of age, I would like to introduce you all to just a few who are rockin’ it at this time.

At the international level, Chenxi Ouyang, a Chinese student recently launched a program for young girls in her country. Last year, I had the good fortune to work with this young woman in Boulder. She was actively preparing to launch her work with girls across China, Bright&Beautiful. 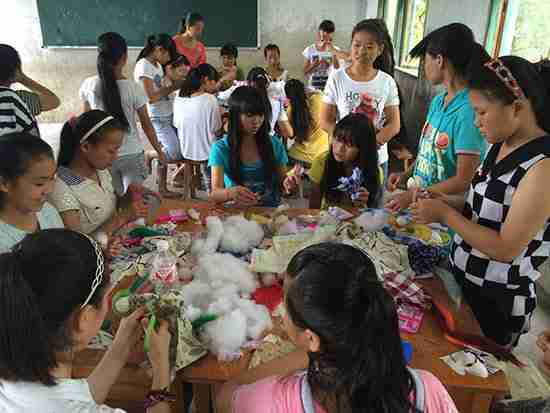 Bright&Beautiful is now a China-based growing movement of girls learning about their bodies, their hearts, and their dreams through the arts. Their mission is “to spread the girls’ inner voice and raise awareness on educating girls.”

As part of Chenxi’s preparations for this launching, she danced with us and assisted me with some work with maidens, young girls moving into early adolescence. During our time together, Chenxi learned of the doll making process originally taught to me by my mentor, Tamara Slayton. Just before Tamara crossed the threshold, she came to see us and was so thrilled to see her doll work expand to diverse communities. With so much love and gratitude for this lineage, we are now making these Golden Dolls around the world, from Los Angeles to Kampala to South India to England to New Zealand and now … in China. It is such a joy to help these doll friends of peace connect women and girls across so many borders … awakening creativity, liberating voices, and birthing collaborations.

Many of you know Darius King, another star shining light into the world. He has been a part of our Surfing the Creative dancing community since 2009, also initiated through his strong lineage of My Brother/ My Sister. Darius has taken his brilliant and brave creative voice straight to the national stage, into the center of the conversation about the inhumane ways that we are treating young black men in our country. Please see this piece that Darius spoke on October 10th, 2014 in Ferguson, Missouri.
Genocide

In addition to his clear call to honor every life lost to this unconscionable war on our streets, another one of Darius’s messages at this time is for all of us to take action. Choose something, anything that matters to you and … Stand up. Speak up. Do something to make this country a more just and sane home for all. Leverage whatever privileges you have … and ACT.

To support Darius’s leadership, please check out his own call to action. People order T-shirts and by doing so, they make an agreement to DO something about the injustices facing the black community. Darius pays for production and shipping of the shirts himself, not asking for money in return from recipients. All he asks is that folks agree to the terms! Innovative! Real and True!

At a local level, another golden youth leader is Cali Machan, a senior at New Vista High School here in Boulder. Each year, the seniors in her school engage in an independent study that allows them to learn about something that school has not taught them and that they find of interest.  For Cali’s senior Culminating Project, she chose to do an in-depth study of the 5Rhythms® and how movement can support her personal growth, emotional wellbeing, and emerging career path. In a very disciplined way, Cali embraced curriculum I have developed, dancing on her own for weeks on end, journaling, and painting as means for expressing and integrating her discoveries. As she says:

“I originally became interested in this work through Movement Mass, and it ended up being a huge part of my journey in high school, my journey with my battle with anxiety, and a driving force for my path after high school. It’s completely changed my life, enlightened my path, and created space for me to grow and learn about myself and the movement of my own energy and emotions.”

Not only did Cali do intensive inner work through her dancing and studying, but she brought her powerful inner awakening to the world, both visually and in service. Check out her tattoos representing her interpretation of the 5Rhythms® and her dedication to their medicine.

In addition, Cali was able to bring even more dance to teens through Natural Highs, a powerful program developed by Avani Dilger, another beloved mentor of Cali’s. As part of Cali’s high school completion, she and I will do some additional teaching of teens together in our local community. From there, she will continue her studies of the expressive arts for healing, dedicated to this path of growing her world service from the inside out. Cali will share her culminating project with her school community just before the Winter Solstice. If you want to learn more, please contact our office for details.

Thank goodness for these young people who are cultivating their gifts and leveraging their privilege to create safety and opportunities for so many other young people around them. They are being exactly who they are, returning again and again to the dance and the creative process to stay balanced and inspired. Simple, soulful, and authentic … emerging leaders choosing to be sane, sober and in service.

Please join them.
See you on the dance floor ~
Melissa